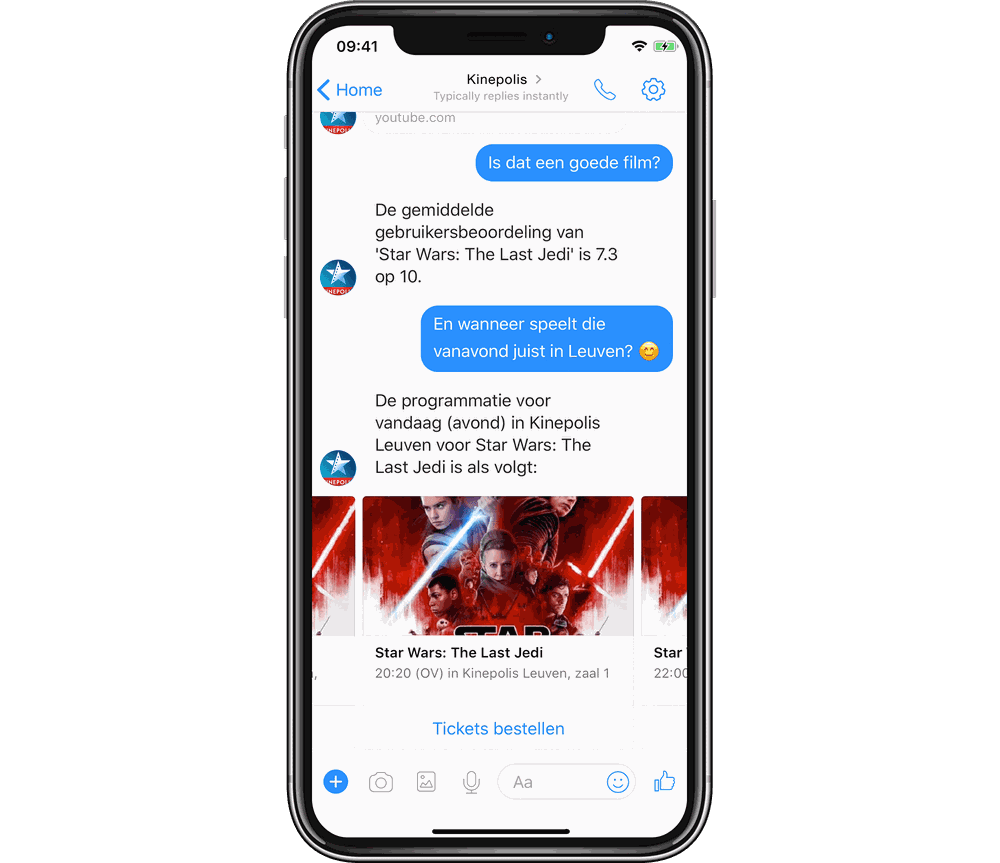 Back to Cases / Ordering movie theater tickets via Messenger

To make life even more easy for movie fans, Kinepolis Group has recently baptised Bert. Bert is a chatbot that not only provides information about the current showtimes at the Kinepolis theatres, but is also able to order tickets for you. To do so, the bot will ask a few additional questions so all parameters are already filled in for the customer, only the seats have yet to be selected in the final step of process. So easy! Bert is our new friend…

Of course, Bert also provides information about the currently scheduled films, the actors that play in it and their trailers. He answers questions such as: "What movies are they playing today in Leuven?", "I would like to see a comedy", "Show me the trailer for the new Lion King", and so on.

But Bert is even more intelligent than that. The new chatbot is not only useful when you want to go to the theatres now, it also provides information on older films. It happened to all us to forget an actor’s name of a certain movie during a conversation. Or to forget the title of Leo Di Caprio’s breakthrough movie. That’s a thing of the past now.

Kinepolis Group has added to Bert’s memory all information about the top 250 films on IMDb, short for the Internet Movie Database, since 1950. So Kinepolis’ chatbot is also a responsive encyclopaedia for film lovers, or for anyone debating in which year a certain film aired and which actors played the leading roles.

The chatbot is currently in a test phase within Facebook Messenger and only available in Dutch. If successful, the rollout in the other national languages ​​will follow shortly and new functions will be added too. For example, if you would like to pay for your parking ticket right away, then Bert will be able to arrange this for you in the future.

The choice for a single-language start is an informed decision. “We want Bert, who runs on our chatbot engine Oswald, to be good at supporting our local languages”, says Michiel Vandendriessche, managing partner. “We have built our own standard language for Dutch, so that Oswald now has a good notion of Flemish. Also, today’s machine learning engines can interpret sentences, within a certain context, and so not only words. This approach is time intensive but allows to get better results. A French version will follow asap.”

Matteus Deloge, technical architect, adds: “We have fed Bert with example sentences related to films: ‘Which films are currently playing in Antwerp’. It’s not what we would assume, but people are not sending ‘films + Antwerp’ to chatbots. They have a proper, human discussion in full sentences with Bert. And if there are questions that Bert cannot answer, they will be forwarded and we can add them to the model if necessary.”

Your technical partner in your creative thinking process.